wild·wood
noun 1. an uncultivated wood or forest that has been allowed to grow naturally.
Once upon a time there was a little girl with long, dark braids who went to school. Just like most little girls. Except one day she realized school was not the best thing for her. So she told her parents she didn’t want to go anymore. With only a bit of a fuss, they agreed to let her do school at home. The next few years were some of the best years of her life. She did long division by the hour, made her dad give her spelling bees, foraged for edible wild plants and mushrooms, built forts, traveled, co-invented a language and started a small business with her parents. She worked, learned, played a lot and was happy. After a couple of years she dreamed to create a space where she could share this liberating kind of education with her friends. She would call it “Yukoners Experiencing Adventure Rediscovering Nature” or YEARN for short. “Come to YEARN and learn to learn” would be the tagline. Unfortunately, YEARN sounded too much like “urine” so nothing ever happened. That, and all the other kids still went to school.
Fast forward a lot of trips around the sun and the same girl finds herself in a small college town in Appalachia, learning and facilitating learning with some really extraordinary humans. Witnessing the realization of her dream from long ago. Except now that dream is a rapidly spreading movement propelled by lots of passionate people. It’s spaces and conversations happening around the world that aim to liberate children from a long outdated domination system. It’s a cimarron* revolution.
I am blessed to be present at the birth of Wildwood. Together with an amazing group families, we are forming an intentional learning community supported by the ALC network. We are currently in a shared space in the basement of a church, two days a week, with 16+ kids from ages 5 to 12. We began meeting two weeks ago. So far, it’s been messy, exhilarating, challenging, energizing, and enormous fun!
We intend to create a learning culture where we are loved and respected for who we are regardless of performance or achievement. We form real relationships that allow us to feel safe to try new things, to question things we feel aren’t right and to speak honestly and feel heard. We trust each other to make our own decisions and we encourage each other to create value that we can contribute to the world. It’s been an incredible experience see the kids thrive in this environment.
It didn’t take long for our set the week board to overflow with kid initiated offerings. Activities so far have included: settlers of catan, fan making, slime making, flower drawing, origami, sewing, geoguessr, tree climbing safety conversations, fairy house making, paper snowflake making, many versions of tag, logo design, acro yoga, chess and much much more. 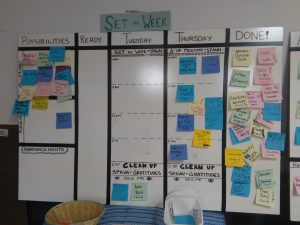 We collaborated on another board for ‘wishes’ we have for the year. Here are some of them: 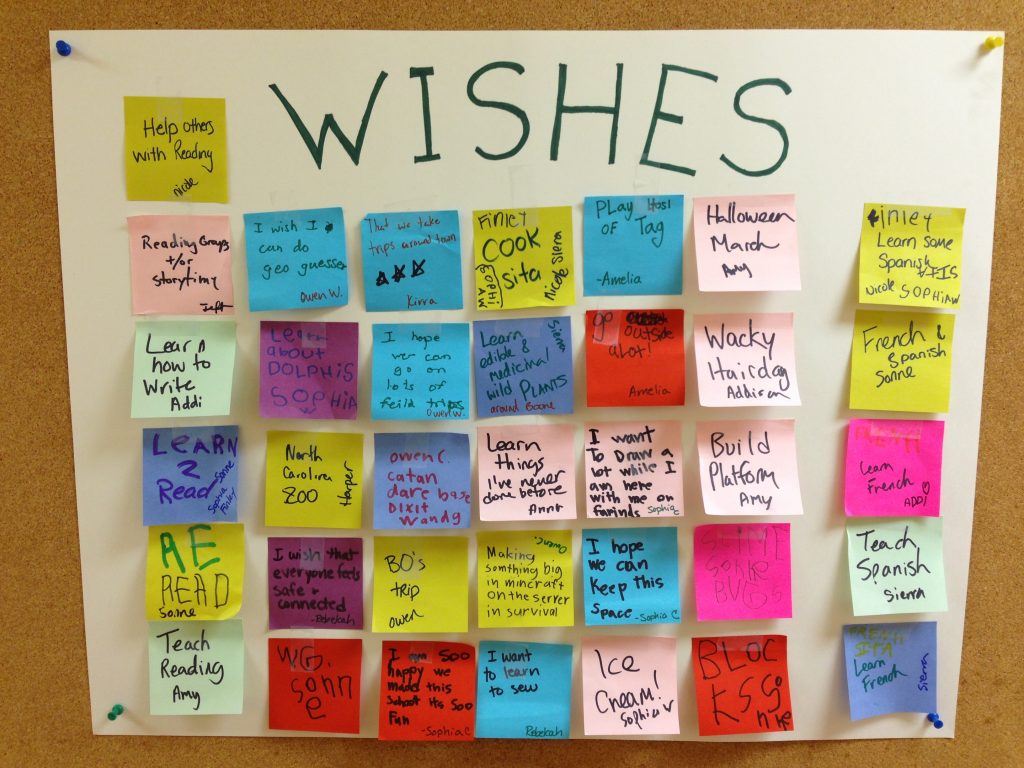 I look forward to the magic as it continues to unfold. Not only here at Wildwood but also in the momentous movement of self directed, community oriented education. I feel optimistic about living in a future with people who grew up in this kind of learning environment. It also makes me very happy to think that if I asked my 8 year old self her opinion, she would probably approve of what I’m doing.
* The term Cimarron, apparently originates from the Taino word “si’maran,” meaning the “flight of an arrow” and was used to refer to enslaved Africans or Native Americans who ran away from their Spanish masters. In modern times it is understood to mean a person or animal who has broken free from a domination system and has returned to the wild as a free spirit. I first heard the term used in the visionary book, Goatwalking, by Jim Corbett